Why Is Spontaneity Important?

Why Is Spontaneity Important?

THE POWER OF BEING SPONTANEOUS

I was so excited for my first ever road trip across the US with my fiancé, John.  At the start of our trip, the coronavirus was a big issue in China, but had not really caused much in the way of big changes in the US yet.

We had planned a 3 month trip starting in Seattle that led us to Arizona, through Texas and then along the Gulf coast all the way to Florida, then up the east coast of Georgia and back through the middle of the country on our way home.  We chose this route purposefully to enjoy the moderate 70 degree temperatures, less crowds and to avoid extreme weather and bugs! 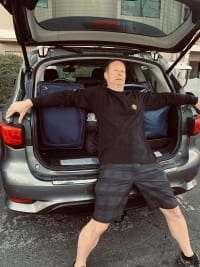 We both talked a big game about really wanting to challenge ourselves to be spontaneous on our trip, but it was difficult for two people who love planning and organization. So despite our desire for spontaneity, we ended up planning our entire trip – what we would do and we booked where we would stay for every single day of our trip.

We set off early in the morning eager to start our adventure.

For the first few weeks everything went according to plan.  We had lined up Airbnb’s so we could cook when we wanted to eat in and go out to restaurants when we wanted to.  We would later learn this turned out to be a godsend.

We had planned to move every 3 to 5 days giving ourselves enough time to enjoy the highlights of each place.

We let the spontaneity happen by allowing ourselves to decide in the moment when and where to eat and what activities to do and sites to see in each city.

About 3 weeks into our trip, the effects of the coronavirus shutdowns and closures hit us for the first time.  We were in Austin, Texas still going out to eat, dancing at an outdoor concert and poking around in shops and galleries on Congress street. 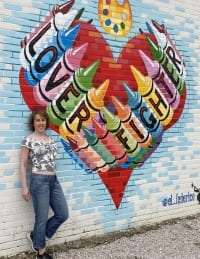 We went to Whole Foods to buy some eggs and seemingly overnight there was nothing on the shelves.  No eggs, hardly any meat or vegetables.

We continued to DeRidder, LA – our next destination in remote rural Louisiana and spent a long day and night deciding what to do.

My first reaction was to pack up immediately and head home as quick as possible.  John brought me around eventually to the possibility that we could continue our trip, but just do it very differently.

We were essentially quarantining by staying in houses instead of hotels, shopping at the local grocery store and cooking at home.

I thought it was going to be a “waste of time” to continue on our vacation since we would not be able to go to any museums, galleries, restaurants and even national parks.

It turns out I was wrong…

Learning How To Truly Be Spontaneous and Resourceful

We changed our route to avoid major tourist cities and picked places that we could hike and bike and be in warm weather.

Airbnb owners stepped up their game to continue to attract business by offering special Covid 19 cleaning to their places and we learned to keep disinfectant wipes in the car to use at all times. 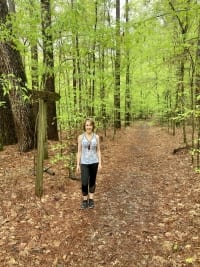 Instead of big popular trails in National Parks, we hiked and biked along local trails getting to enjoy unique geography, plants and animals.

Here is what I learned about letting go and truly allowing spontaneity into my life:

Once we decided to turn around and head home, we would just randomly pick a place to stay and the amount of time we wanted to stay there.  Usually it was anywhere from 3 to 5 days.

We had uncanny luck with the weather.  Besides one hour of light snow flakes in Santa Fe, during our entire trip it did not rain or snow during our stays.

We only got “weather,” in the form of rain and some hail, on our travel days.  Luckily, John, for some crazy reason thinks it is “fun” to drive in storms.

As the fear of the virus spread, some owners of the Airbnb’s we had booked cancelled on us, sometimes with only a day’s notice.

Instead of panicking, we would just look for another place and found even more amazing homes that we would never have ever imagined staying in.

One of the most stunning places we stayed was in Park City, Utah,  It was a spectacular home that slept 19 people in a neighborhood where the “average” chalet had 8 bedrooms and 8 bathrooms and gorgeous views of the mountains.  Our home normally went for around $350/night off season, but our cost was around $100/night.

The home was beautifully designed by a top designer and had a fully stocked kitchen with top of the line appliances, pots and pans and spices, games galore – several xboxes, indoor basketball and pac man, a hot tub…I could go on and on. 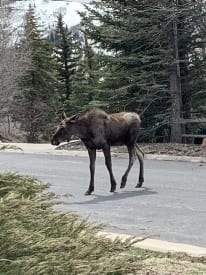 We had the hiking trails practically to ourselves and saw amazing wildlife – several moose, wild turkeys, marmots and Sandhill Cranes all walking the streets of the practically deserted neighborhoods.

We had not planned on going to Park City, but it popped up on AirBNB as a suggestion of places to rent outside of Salt Lake City.  We let go of where we thought we should stay and the direction we were heading and it turned out to be so much better.

3) Be Open To Suggestions

We were sitting on a rock near a stream on an obscure trail in La Verkin, Utah trying to figure out our next route towards home. We had booked an AirBNB in Boise, ID and the owner had canceled on us and we were reconsidering our route home. We did see another AirBNB in Boise on the road to Bogus Basin that we were considering but we were also considering going home through Montana.

A couple was passing by and we struck up a conversation.

Because of social distancing, we rarely talked to anyone, but for some reason this time it was different.  As luck would have it they were from Boise, Idaho!  They told us about how great Boise was and how great all the great hiking trails were on on the road to Bogus Basin.

So we took it as a sign and went and booked the home in Boise on the road to Bogus Basin.

Although Boise was not on our original route, we fell in love with the town. 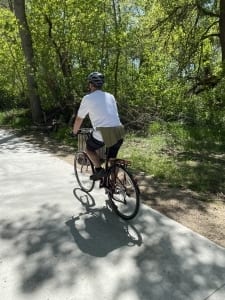 Even better, although almost everything was closed, bike shops were still open since they were considered an essential business.  So we were able to rent bikes.

Boise has a spectacular 20 plus mile tree-lined, paved bike path called the Boise River Greenbelt that runs along the Boise River right through downtown skirting Boise State University. It was one of the best urban bike trails we have ever seen. (John even snuck in to take a photo of the blue turf in the Boise State football stadium right adjacent to the trail).

We even saw a new sport – boogie boarding in the rapids of the Boise River!

4) You Can Manifest What You Want

John and I are both big animal lovers although we differed on what we wanted to see.

He wanted to see snakes, alligators and javenlinas. I wanted strictly “cute” mammals.

In every town, we set an intention to see the local wildlife.

In Sedona, it was a Javelina…

Every night after dinner, would take a short walk in the neighborhood. One night, just a few blocks from our house, I saw an animal out of the corner of my eye.

It was a Javelina and as we followed it down the street it lead us to a pack of Javelinas eating something very noisily on the side of a neighbor’s yard.  There were about 10 of them including babies!

John had been wanting to see a snake the entire trip, especially a rattlesnake.  I was NOT on board to manifest that desire.

One night in San Tan Valley, Arizona we were doing a nightly walk in the neighborhood and John saw two gopher snakes lying in the middle of the street.  He got to hold them and put them out of harms way.

I thought we were good to go with manifesting his desire to see snakes, but I was wrong. 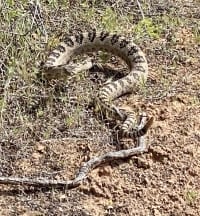 At our destination in La Verkin, Utah while hiking along a trail, I heard a loud rattle.  Just about 5 feet ahead of John, who was thankfully leading, was a huge thick bodied rattlesnake coiled and ready to strike.

I stood behind John begging him to not get any closer as he happily took photos.  After giving us lots of warning, he slowly backed away into the brush.

Before our trip I was not a big fan of desert terrain.  My experience has been nothing but barren, dry, rocky trails and scrubby plants.

I choose to let go of that negative frame and surprised myself by falling in love with Sedona, AZ.

I saw the beautiful colors of the rocks and came to appreciate the beauty of the cactus.

Although we did not get to see all the tourist attractions we had originally planned on our trip we got some other unexpected advantages.

Gas prices went lower and lower.  By the end of our trip, we saw prices close to $1 a gallon. At the start of our trip in Seattle it was $3.89 a gallon!

There was virtually no traffic anywhere on the roads.  We leisurely enjoyed walking down the middle of the streets during our neighborhood walks. 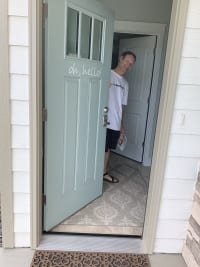 AirBNB rental prices dropped significantly in most places we stayed.

We learned to be happy and appreciative of the very small things like finding an open bike shop or purchasing a fresh key lime pie.

7) You Don’t Have To Gain Weight

I am normally very careful with my diet and I exercise almost daily.

On this trip I ate dessert pretty much twice a day and mostly just walked or did moderate hikes.

After 2 months on the road I only gained a pound.

I had lots of expectations of how our trip should be and how it needed to unfold for me to feel happy.

Turns out I was wrong. 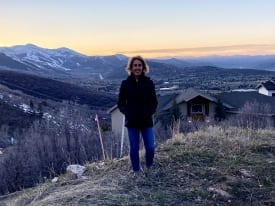 I think the biggest takeaway I learned from this trip is when you let go of controlling how you think something should be or how it should happen, things always work out. Typically for the better.

I understand that having control is an illusion, but that does not mean I don’t still try to control things.

I learned though, when you are willing to purposely let go and allow spontaneity, is when the magic happens.

Learning How To Be Spontaneous

If you are at a point in your life where you also want to learn how to be more spontaneous, click the image below and let’s talk.